You’re Only as Good as Your Second Serve!

Coaches and players alike have been saying it for years, “You’re only as good as your second serve”. If we know this, then why are there so many poof ball second serves out there? You see it all the time, someone steps up to the baseline bombs in a first serve that just seems to keep barely missing the service line. Then that someone steps back up to the line to deliver the second serve, the anticipation builds, they repeat their service routine, toss the ball, and “poof”, they dink the serve so lightly they have to blow at the back of the ball just to help it clear the net.

Your opponent quickly notices this padinker of a second serve and starts to quickly move up in the box and make you pay. Ladies and Gentleman, it’s time to start getting out there and developing that serve into a weapon that is dependable and reliable.

Here is the first lesson, simple and easy. Get out and practice your serve. The serve is the most under-practiced part of the game, yet we have to do it every other game in singles and once every four games in doubles. The serve starts are points, yet we will practice a forehand for hours and only give 10 minutes to serve practice. It’s the one shot in tennis you can practice every day without having anyone you need to hit with.  No excuses.

So how do we hit this second serve? Well, let me give you the keys to a great second serve. 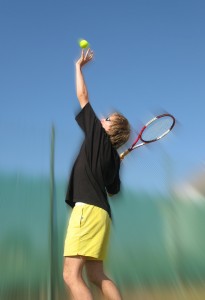 First, use a continental grip. If you don’t know this grip, research it on YouTube. There are several videos on it. The benefit of the continental grip is that it allows you to hit a variety of serves without changing your grip.

Second, stay relaxed. Keep a very loose grip and wrist. Staying relaxed allows you to create speed in the racquet, and speed is power and faster spin.

Third, keep the same relaxed speed and acceleration on your first serve into your second serve. Speed in the racquet is our friend.

Fourth, the only difference between our first serve and our second serve is the way we meet the ball. On our first serve, we will get our strings more behind the meat of the ball, or the back of the ball. For second serves we want to keep the same speed, but create more of a skimming motion on the ball, which creates a faster rotation on the ball. Anytime we add more rotation or spin to the ball, we gain more control, and control is good.

In terms of spin, I first recommend the slice serve. The slice serve is the easiest to learn, and it is a lot less stressful on your back. To learn the slice serve, once again the best grip to use is the continental grip.

After you have mastered the grip, the next step is to master the slice spin. The spin is generated by hitting the outside edge of the ball for a right hander. If you were to picture the ball as a clock, you are trying to hit the ball at 3 o’clock, creating a side spin on the ball. If you did this incorrectly, you probably just hit the player on the court next to you. Its an easy fix. Use the same spin, but aim more to the center line of the service box, and let your spin draw the ball back into the box.  Don’t worry. You will have the serve working in no time at all.

You’re only as good as your second serve, so take the time to go out and practice it daily.  Its the one shot you can practice all on your own, so no excuses.  Please remember you must have the courage to hit your second serve, and learning the slice spin will give you the courage to go up and get that serve, taking your game to a whole new level.

Find us on Social Media